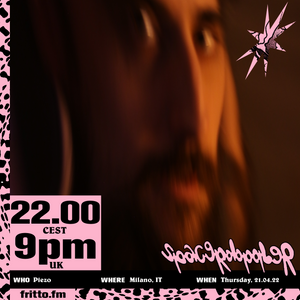 "Piezo is a Milan-based electronic music producer, DJ and sound artist working at the intersection of UK techno, sound-system culture and mutant dance music.
He released records on well-regarded labels including Idle Hands, Swamp81 and Version, as well as on his own label Ansia.
In 2020 he was included in the SHAPE platform roster - and in the same year he released his debut album 'Perdu' on Milanese cult experimental label Hundebiss Records.
April 22nd will see the release of 'LSD Superhero', a 5-tracker EP on Wisdomteeth the influential UK label run by Facta and K-lone."