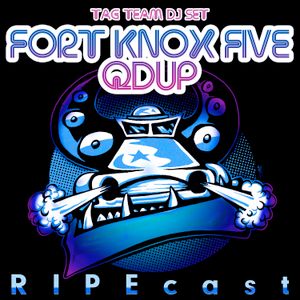 When Deckard reached out to us about doing a new mix for The Ripecast, he asked if we would think about doing a Jon H dedication mix. We thought it would be fun to pull some older tracks that influenced our sound. As you may or may not know, in the late 90’s and early 00’s Qdup, Jon H and Steve Raskin were in the 308 Crew. It was named after the address of the house where we all honed our skills and used to DJ marathon afterhours sets. This mix is a retrospective of a lot of late 90’s and 00’s era tracks with a few more modern surprises that we would have rocked in our earlier days DJing. Lots of these tunes were from vinyl and were some of our favorite tunes of the era. We had a blast making it and know this mix would put a huge grin on Jon H’s face.

Love you Jon! Love You Guys!

Very good selection! This track releasing large amounts of my good energy. My fees seems to be dancing to this. Good work :)

There's no school like old school. Please check out my breaks also https://m.mixcloud.com/DJShadowMonkey/dj-shadowmonkey-dads-night-drop/ much love.

can we get a tracklist pleeeeease?

What you gonna play now? Siiiiiick mix! Jon would loooove it

Brought back so many memories and made me pull out so many of these records!

this is Bad AsSSS!