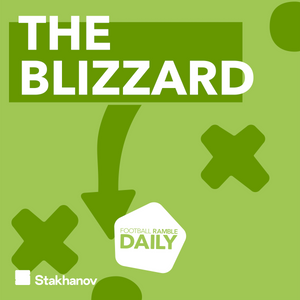 The Blizzard: Liverpool 3-3 West Ham United, 2006by The Football Ramble

We’re heading back to 2006 for the latest episode of Greatest Games, in association with The Blizzard, to a match our guest described as “perhaps the best FA Cup final there had ever been.” It’s the 2006 final between Liverpool and West Ham, and our guest is the Guardian football writer Jacob Steinberg!

The FA Cup had seen some fairly underwhelming finals throughout the late 1990s and early 2000s, but this game in Cardiff gloriously bucked that trend. West Ham, with Alan Pardew in only his second full season in charge, took on the European champions in front of 71,000 at the Millennium Stadium. We discuss the lead up to the game and the respective sides’ impressive seasons, as well as the match itself - that late Steven Gerrard howitzer included.

Fancy getting in touch? Email us at blizzard@footballrambledaily.com or find us social media— just search 'Football Ramble Daily'.

For more stories from the annals of football history, visit www.theblizzard.co.uk to explore their archive

More from The Football Ramble