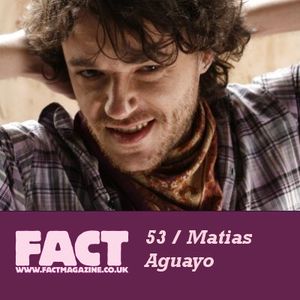 FACT’s massive man crush on Matias Aguayo just gets bigger and bigger. He’s always been one of our favourite artists – not only a great house producer, but a dancer, singer, and general personality operating in a form of music that thrives on facelessness. This year, he inaugurated a new label, Cómeme, that deals with music from mostly South American artists. It’s in places like Chile and Argentina that Matias runs his bumbumbox parties – a series of street raves that feature Matias and his friends playing til dawn on crowded street corners – and it’s from those nights that Cómeme was born. Matias goes in depth on the philosophy behind bumbumbox in the interview you can find further down this page, so download the mix and dig in. Interview at http://www.factmag.com/2009/06/01/fact-mix-53-matias-aguayo/