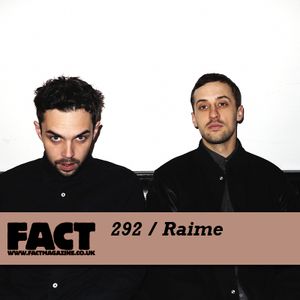 The London-based duo of Joe Andrews and Tom Halstead has only released three 12″s to date, but the substance of these records has earned them a hallowed reputation that many more prolific artists would kill for.

It’s taken a certain amount of time and delicacy to coax them into recording a mix for us, despite, or perhaps because of, their affiliation to Blackest Ever Black, a label independently operated by FACT’s Kiran Sande. To date, Raime have created two mixes for public consumption, and they both showed links between their own music and that of passive-aggressive industrial and goth artists from the late 70s and early 80s.

But there’s something else that exerts an influence on Raime equal to, perhaps even in excess of, that of anything from the post-punk era: jungle, particularly that made in ’94-’95, when the music was as rough-hewn as it was progressive. It's an essential part of Raime’s make-up, and it’s also the focus of their FACT mix.