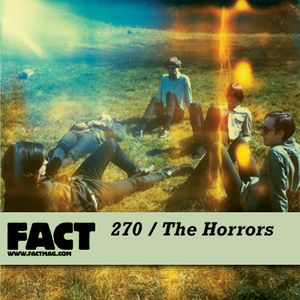 Growing up in public is tough, but the London five-piece have gone about doing so with dignity, maturing way beyond the promising but fundamentally underwritten and overblown bouffant-gothisms of their 2007 debut album to strike a rich vein of brawny but windswept psychedelic rock on 2009′s Primary Colours, one that they’ve tapped again for this year’s extraordinary Skying (XL Recordings).

The Horrors’ mix, subtitled It’s Just A Rumour, couldn’t really come at a better time – not only are the band at the height of their creative powers, the songs that Tom (Furse, who has put together the beautifully selected and sequenced mix) has chosen lend themselves perfectly to high summer in Albion. Rest assured, if we didn’t have work to do, we’d be out mushroom-picking and lolling in the sunshine with FACT mix 270 as our soundtrack.

Glorious mix you have here! Love it! Very nice selections. I just uploaded a mix you might enjoy along this same vein.