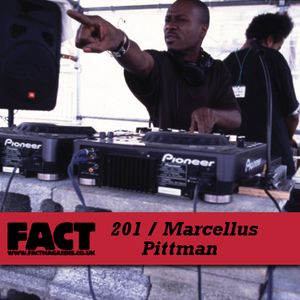 We’re pleased to place one of our favourite house producers of recent years, Marcellus Pittman, in the driving seat for FACT mix 201.

Pittman has collaborated with virtually everyone worth their salt in contemporary Detroit, first coming to prominence with a bunch of Theo Parrish co-productions released across two 12″s on Parrish’s Sound Signature label in 1999 and 2002. His Midwestern Advocates EP Part One is a modern classic, the austerely jacking B-side ‘Chicago Nights’ simply devastating, while this year’s Loneliness ‘Leave Me Alone’ / ‘Razz ’09′ has a more obviously Detroit beatdown flavour.

FACT mix 201 has a real lo-fi crunch to it, a quality with which fans of Omar-S and Kyle Hall will be intimately acquainted. It’s anchored with classics, including tracks by Louie Vega, Larry Heard, Marshall Jefferson, Ron Trent and ESG, but look out too Theo Parrish’s recent ‘Space Station’ and two heavy-duty productions from Pittman himself.

Had the pleasure of catching MP live in LA. It was a blast. Thanks!