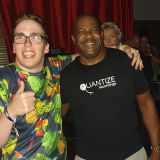 Paul Michael Ross has been into his music from an early age, influenced by his family who were always listening to music and travelling to different music events.
He presented his first radio show at Heartland FM when he was 14 playing Motown. He ventured on to Leith FM where he had two regular shows and as a student helped out as head of Technical at Edinburgh Fresh Air Radio while having his own show playing House music.
While completing his Degree in Audio Engineering he was playing the Student Club Nights in Edinburgh as warm up for Kissy Sell Out, Scratch Perverts, Jakwob and Ministry of Sound.
In 2016 after University He founded the award winning “SAM RADIO” a Community Radio Station for Autistic Adults. Paul himself has Asperger’s.
Paul is a resident DJ at Edinburgh Biblos Bar playing most weekends Soulful House, House, Gospel & Disco.