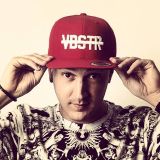 The foundation for his success and drive is without a doubt his love for music. Ever since he started listening to music and bought his first turntables at the age of 15 (1998), he was determent to bring his love to the people and has done so with great success. Mixing, scratching and beat-juggling he made his way to the top in Belgian nightlife and became resident at the Belgian nr1 club ‘Versuz’ in 2007.
He played at award-winning festival Tomorrowland (Dirty Dutch Stage), Urbanice at Sportpaleis and Lotto Arena (Antwerp), Vestival (NL) and events all over Europe and beyond (from Switserland, Italy, Spain, Malta, Germany, Netherlands, France, Luxemburg to the Egypt and the UAE, …). In 2013 Frederico signed a deal with the Belgian agency Night Republik and became co-owner. In 2014 Night Republik launched the concept VIBESTR (#vbstr) in coöperation with Versuz.
With his own Hiphop-Eclectic style, Frederico will continue to preach music in the future for crowds wherever they may be..