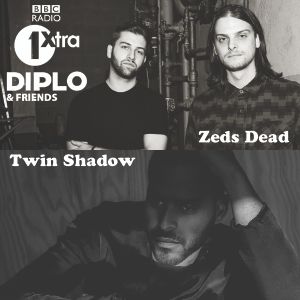 Brace yourselves for an amazing episode of Diplo & Friends featuring Zeds Dead and Twin Shadow. Zeds Dead is killing it. They’ve got an enormous catalogue that includes remixes for some of the biggest artists out there, and releases with the most credible labels in the game. They’ve accumulated hundreds of millions of views online. Fans love their shows, critics love their creativity, and heads love their production. Having already established themselves as one of the most versatile and ambitious acts around, Zeds Dead break new sonic territory with there new EP, Somewhere Else. Joining the Toronto duo on the record is Twin Shadow for the house anthem”Lost You”. Born in the Dominican Republic, raised in Florida, and boasting an expansive musical background that includes composing for a touring dance company and fronting a Boston punk group, George Lewis, Jr. put his own multifaceted spin on chillwave when he started making solo bedroom recordings in Brooklyn as Twin Shadow.

Zeds dead was my first dub step experience after a long term break up, it healed me hahaha! :) thanks guys

Great! Check out my mix if you

LOVEEE THE PANNING RIGHT THERE!

More from Diplo and Friends on BBC1