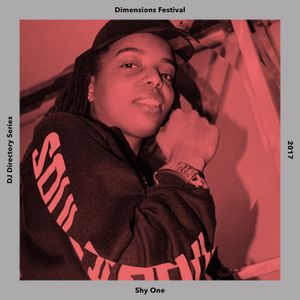 Stepping up for mix #7 of our Directory series we have Mali Larrington-Nelson aka Shy One.

Shy is 26 years old, but already she’s been involved deeply in music for nearly a decade. It began for her in 2003, just as grime was emerging as a musical force and having its “wot u call it” moment. A youth club DJ course with scratch wizard DJ Blakey gave her the bug, she began to collect those early white labels – by Wiley, Target, Danny Weed, DaVinChe, Musical Mobb, Dizzee, Wookie and Scratcha – and to DJ as part of a crew. Now unconstrained by anyone’s demands, she has been able to hone a distinctive sound that keeps the lo-fi punch and quirky synths of grime but explores her funkier instincts through house rhythms and varied tempos.

For more info on Shy One and the DJ Directory, head over to www.dimensionsfestival.com/dj-directory