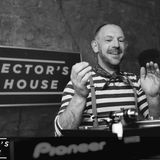 Derrick started DJing in the early 90's at local clubs like "Rub a Dub" and "Turtle soup" where he experimented with anything from House, Hip hop, and even The Housemartins, from his extensive vinyl collection. Once he had mastered the art of pleasing the crowd, he took his talents to Edinburgh playing in "The Vaults" and "Club Ego" and in the late 90's he entered and won a DJ competition in "Mixmag" magazine to play at "Cream" in Liverpool, along side residents Paul Bleasdale and Seb Fontaine, where he rocked the Annex room. A monthly residence followed through "Kiss FM" at "The Empire" in Middlesbrough. Derrick is currently one half of the "Rendition" club night, promoting and bringing some big name DJ's to the Scottish Borders.
Derrick also produces electronic music under the name of "Acid House Casual+y"