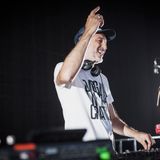 booking contact : torsten.rettert@goodliveartists.com
Born 1970 near Stuttgart, Germany. Started mixing and collecting records in 1985. After competing in various DJ battles (such as the DMC German Championships 1991) he had his first residency in a club in Stuttgart in 1991. During the 90's he was mostly known as a Hip Hop DJ/producer and as a member of chart topping Hip Hop band Freundeskreis. With Freundeskreis he released 2 gold selling studio albums, 1 live album and a best of album (FK 10 in 2007). Since 2000 he released 4 solo albums, made countless Remixes (The Jackson 5, Das EFX, The Pharcyde, Die Fantastischen Vier, Malente just to name a few) and his newer projects include Motor Mouth with Philip König and Bodymovin with DJ Thomilla and the Boogie/Funk project Ground Control. Nowadays he's mostly into Modern Funk, House, Electro- + Discofunk. As a kid growing up in the 70s and 80s his influences are Discofunk, Electrofunk, Boogie, Soul, Italo Disco, Hip Hop and House.