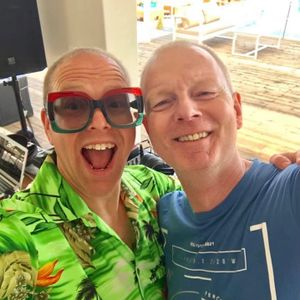 RIP Stu, were all going to miss you.

DjPaul & The House Classics2mo ago

Absolutely spot on mate thank you for this tribute much love Bill :)

remember the show on Key 103 on sunday nights, I had missed the early 90s rave era, except at school discos and through listening to the radio and tapes recorded off pirate stations, when I was old enough to go out, his bowlers mix tape was a driving around and pre-going out soundtrack, going to listen to all of this, thanks for sharing and uploading!

This show was beautiful from start to finish Billy, thank you so much for your work and your openness in talking about a dear friend of yours loved by us all. I will play this show again and again and again.

Thanks Billy this is a wonderful tribute show to the great man. Proper trip down memory lane, listening to Stu's radio shows was what first got me into the whole house/dance/rave scene and what a ride it's been since! Loved hearing Warrington's Hot Waxx Records got a mention when Stu was giving the Legendary event a plug as it was a regular haunt of mine back in the day along with Spin Inn and 3 Beat etc. RIP Stu Allan and thanks for all the music and the great memories. ❤️

what an awesome tribute! legendary tunes and selector. RIP Stu