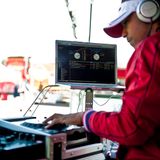 Never miss another
show from DJ Will Gill

A DJ, a VJ, a remixer, and a producer, Will Gill is an artist and collaborator with much diversity to his trade.
Touring to date with venues from Caribbean to Canada and Northeast to Southwest, Will Gill has performed with Flo Rida, Paramore, and Samantha Ronson. He locally resides with Nike LA and rotates venues throughout Los Angeles, San Diego, and its beach cities.
A fan of collaboration, Will Gill freelances his ear to remix projects with producers, DJs, and artists alike and has worked on projects for Michelle Williams, Chris Stokes, and Sticky Fingaz.
Will Gill spends the majority of his time in studio, constantly adding to his catalogue of instrumentals and songs. Nonstop, he hones his craft some have come to call Sonic Vision.
Though fans know what to look for in what he brings to the table, Will Gill never allows expectations to plateau, rather allowing them to grow just as his music and how he unleashes it to the world grows.