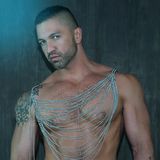 DJ/Producer P0RNSTAR has been pumping out ridiculous beats since 2004. P0RNSTAR is the one and only, holding a licensed trademark and servicemark, so not to be confused with the many P*rnstar DJ’s out there … there is only one, and this is him! His abilities on the decks have garnered him gigs at some of the largest Parties and with some of the most well-known Promoters in North America. He has played amazing sets at over 30 Pride Events over the years, and donated his talents to many Charitable Organizations; giving back to the community whenever he can. P0RNSTAR was rated in the “TOP 5 Sexiest American DJ’s” in 2011 by Noize Magazine, and in the “TOP 10 Coolest DJ’s” in 2012 by Queerty.com. His tracks have not once, but twice hit the charts on GayDar UK Radio. P0RNSTAR was signed with Swishcraft Artists in 2011, and works in association with Sobel Promotions. His tracks can be found on many websites, but mainly on soundcloud.com and those for sale on beatport.com .