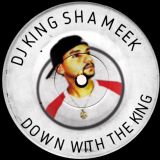 Veteran DJ/producer King Shameek has been putting it down for more than two decades. The New Jersey native first came to prominence in 1989 as the DJ for the group Twin Hype, and later appeared on records with classic artists such as Naughty By Nature, T La Rock, King Sun, Sweet Sensation & Lisette Melendez among others. Touring the world over the years gave Shameek the opportunity to share the stage and DJ booth with the likes of Queen Latifah, Jazzy Jeff & the Fresh Prince, EPMD, Digital Underground, Jay-Z, Chris Brown, Bow Wow, Trey Songz, Just Blaze and Funk Master Flex to name a few.

After 20+ years in the business, Shameek is still going strong producing, remixing, spinning in clubs from the east to the west coast and holding down a classic mixshow called “Down with the King” on Mix106 WUBU with plans of being syndicated nationally.