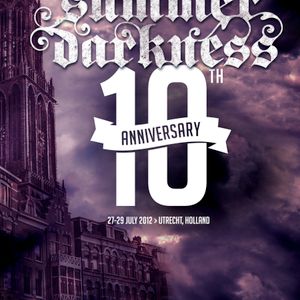 [:SITD:], The Cruxshadows, Suicide Commando, Eisenfunk, The Peoples Republic Of Europe and more.

The mix starts with [:SITD:], with "Rot" they have created a song with a lot of dynamics and a good bass. Followed by "Birthday" from The Crüxshadows, what is of course a reference to the 10th edition of Summer Darkness. Rapidly the number is followed by the band Suicide Commando, what makes already since the last century beautiful EBM. Here is chosen for a 10 years old remix of the classic "Hellraiser". Next, the turn comes to Eisenfunk, chosen because it's a band from "Meine Heimat". This time no bouncing green dots, but "Super Space Invaders", another popular song with also a beautiful video clip. After this band from Munich comes noise from Dutch soil, The Peoples Republic Of Europe, that shows why every band should use a cowbell, soon followed by Welle:Erdball, that, with their old bleeps, can create a wonderful sound. After that VNV Nation, the EBM-Hit band that shall certainly can't be missing in this mix. It's a remix of Das Ich, "Destillat", maybe the most played song ever and