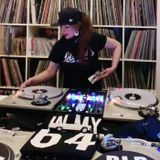 Never miss another
show from DJD1200

Recognised worldwide as Australia’s premiere female Turntablist, DJ D remains loyal to that vinyl tip with 2 of the nations first all dj-mixed radio shows featured on the Community Radio Network. An active member of of the forty five kings collective, DJ D is also known for her achievements in the DMC championships placing 8th in Australia in 2005, 3rd in NSW in 2015 as the only female competitor, and top 10 in 2020 receiving an endorsement from Pioneer DJ with her world first hydraulic 1200 turntable.