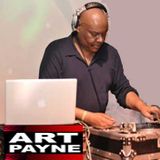 Never miss another
show from DJArtPayne

DJ Art Payne is a Detroit based DJ that has been spinning records since 1982. His DJ career started at Eastern Michigan University spinning records with his college room mate DJ Keith Martin. During the mid 80's - he joined a DJ Crew called Deep Space which consisted of Detroit Techno legends Juan Atkins, Derrick May, and Eddie Fowlkes.

Although DJ Art Payne could be considered a Open Format DJ but he still loves to play House Music but finds Rap, R&B, and mainstream music more profitable to spin. He has taken his DJ skill level to the next level by incorporating Music Video mixing into his DJ sets and is on the road to becoming one of Detroit’s premier Video DJs once he finds the proper venue that is willing to dedicate the time and effort to properly expose this exciting new music concept.