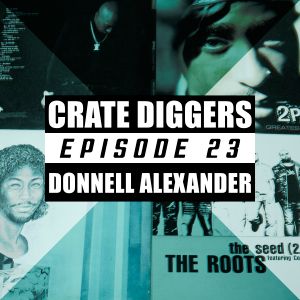 This show was 15th in the global interview chart.

Welcome to episode 23 of Crate Diggers!

Crate Diggers is a music / interview podcast using vinyl records as a jumping off point for conversations between artists and other cool people. Hosted by veteran DJ, Verbz and produced by his brother, hip hop producer Steez.

The guest for episode 23 is writer, Donnell Alexander. Donnell is currently working as a facilitator for Oregon Humanities and has written for a list of premier publications from ESPN, Huffington Post, Time, and many others. Donnell Alexander has written several books including an in depth look at behind the scenes of the early West Coast gangsta rap movement. His interview with Dock Ellis, The LSD No-No went viral and has been seen millions of times. On top of that he's a great knowledge base and an incredible life story.

Our featured producer is Portland / LA DJ and producer, DJ Flip Flop. The long time DJ for CunninLynguists helped provide the soundtrack for this episode. Check out CrateDiggers.net for more!