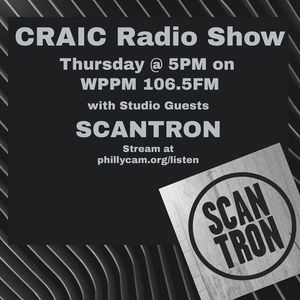 On this week’s CRAIC Radio Show our “Music Makers” guest was George M. Murphy of the band Scantron. He explains two guitars, bass, drums and farfisa. He talks about the band’s changing approach to studio recording and twenty year plan for discovery. He reveals the identity of the band’s “female” backing vocalists. It’s all here, raw and uncut.

CRAIC Radio is broadcast each Thursday from 5:00pm to 7:00pm (US Eastern) on WPPM 106.5 Philadelphia. This episode was hosted by Sean Timmons. Producer is Sean Timmons.