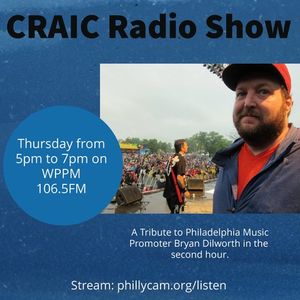 Our “Music Makers” guest was music promoter Bryan Dilworth in a repeat broadcast of his earlier interview. Bryan passed away earlier in the week and we dedicate this show to his family and friends.

CRAIC Radio is broadcast each Thursday from 5:00pm to 7:00pm (US Eastern) on WPPM 106.5 Philadelphia. It is hosted by Sean Timmons and Fergie Carey. Producer is Sean Timmons.