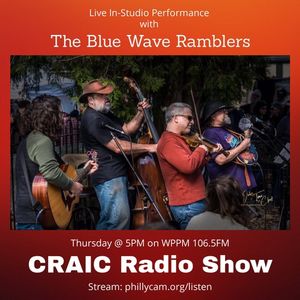 On this week’s CRAIC Radio Show, our “Music Makers” guests were the “traditional rockgrass” band, The Blue Wave Ramblers. We’ll learn about a band that’s not Bluegrass, not Newgrass, not Jamgrass and not New Wave but does not have an identity crisis. Uncover “Operation Jethro,” the North East Urban Boys and a love song to a horse. Photo by John Clark of City Island Music.

CRAIC Radio is broadcast each Thursday from 5:00pm to 7:00pm (US Eastern) on WPPM 106.5 Philadelphia. It is hosted by Sean Timmons and Fergus Carey. Producer is Sean Timmons.