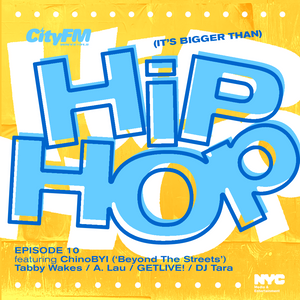 This show was 28th in the global interview chart.

Ep. 10 “Hip-Hop (It’s Bigger Than)”
New York is hip-hop. This city is the birthplace of, and a living, breathing monument to, the most popular and influential musical culture in the world. So when putting together a CityFM episode about New York and hip-hop, where does one even begin? We decided to look at some of the elements that help define this culture — MCing (oral tradition), DJing (musical tradition) and Graffiti writing (visual tradition) — check-in on how those forms have evolved, and what their practices look and sound like now.