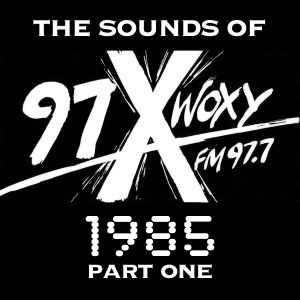 "The '80s were so bad, I had to invent my own…It was a terrible decade for music."
-Mike Scott, The Waterboys

Well, yes and no; pop and classic rock radio were certainly bleak, but alternative music was flourishing. In southwest Ohio I was lucky to have WOXY 97X, an independent station where the '80s was a wildly varied wonderland of new and unusual sounds. 1985 in particular seemed staggering in its offerings: now-classics, forgotten one-offs, even songs that later broke into the Top 40, 97X played it all.

Lo-fi snippets of vintage WOXY broadcasts can be found on SoundCloud, but I've assembled this series of mixes in part to highlight tracks that I've still never heard anywhere else, including local artists from the OH/IN/KY region and songs that can't be found on streaming services. I hope you enjoy this peek into a golden age of alternative radio.

(Some holdovers from '84, kept in rotation throughout '85 due to listener demand, are included here for historical accuracy.)

I loved 97X Thanks for this!

Thanks for listening, Brian!

I absolutely love your 1985 mixes - year I graduated high school and left for college. I was a college DJ freshman year - spun a ton of these songs. What a total treat

Thank you; it took 30+ years and Audacity for me to get around to scratching my DJ itch, but I've loved making these.

I like how you followed Dead Milkmen with Gene Loves Jezebel (if there is a God in Heaven, I'm sure that band will burn in Hell).

Thank you for doing this! In the 80's and 90's I had all my radios set to WOXY and this fact gave me a lot of crd at my frat cook job on the Oxford campus (and the morning crew at 97X used me for a lot of voiceovers as I called in daily during that job)

You're very welcome; I'm glad you enjoyed it.