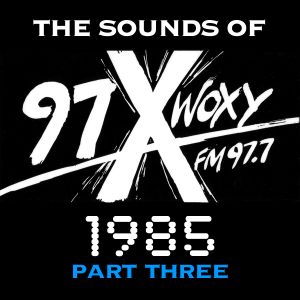 Welcome to the third installment of this series, intended as companion pieces to a 1985 article about 97X WOXY (here: http://wp.me/p6ndCB-dg), a pioneering modern rock radio station in SW Ohio.

It's also a love letter to another era… not simply to the music (most of which has aged surprisingly well), but to a time when a married couple with a nest egg might think of owning a radio station; when DJs had a remarkably free hand, digging deep to unearth the subterranean oddities that listeners wanted; when commercial radio could be a source of constant surprise instead of comforting familiarity.

PS: Within 24 hours of posting this mix, I suddenly remembered a beloved song that I'd neglected to include, and then I remembered another, and on it went until I realized I’d inadvertently skipped enough stuff to fill a fourth mix. So thanks for listening, and please stay tuned.

It would be nice if commercials and DJ banter were included.