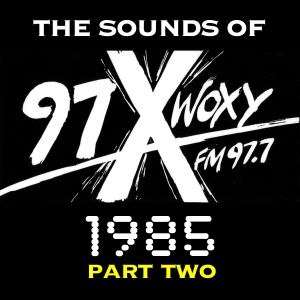 Welcome to part 2 of this series, intended as a companion to a 1985 article about 97X WOXY [here: http://wp.me/p6ndCB-dg], a modern rock radio station in SW Ohio. From a tiny building near the outskirts of Miami University, 97X eventually went on to broadcast online, building a worldwide following before ceasing operations in 2010.

One of only a handful of commercial alternative stations in the country, 97X played music that couldn't be heard anywhere else in the region and fans went to great lengths—wildly contorting and augmenting their radio antennas—to pick up the modest signal. And given the station's insistence on variety rather than repetition, listeners were wise to keep a cassette or notepad handy to capture a track that might not be heard again soon, if ever.

It's been heartening to learn that I'm not the only one still so stunned/obsessed/affected by that exact place and time. Thanks for listening; I'm really glad you're enjoying them.