The Stafford Story Part 65. Chris King: The Palm Of Your Hand 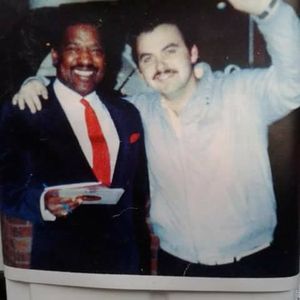 The Stafford Story Part 65. Chris King: The Palm Of Your Handby Chalky

This show was 12th in the global northern soul chart.

Chris King an extremely popular character over the years. A Deejay with vast experience and one who knows how to work the floor. Chris is also an vastly experienced promoter for many decades at such places like Coalville and Hinkley with Terry Sampson and The Weekend Soul Club. Chris was also responsible for bringing many US Soul music acts to U.K., the most renown of them all being the Pic Tic Review.

Chris became involved with Stafford in the last 6 months or so of its life. Along with Dave and Chris, Steve Croft who ran the all-nighters at Warrington’s Parr Hall also came on board and it became known as the Three Voices Soul Club. The purpose of the union was to avoid clashing between the three clubs and bring some harmony to the all-nighter scene at the time….something seriously lacking on today’s scene.

Willie Harvey - My Baby Ain’t No Plaything (New Holidays)
J.J. Barnes - Hole In The Wall (Unissued)
Royal Premiers - I Can Make It If I Try - MBS
Ruben Wright - You’ve Done Me Wrong - Capitol
(Played from an acetate and played as Eddie Holman)
Chuck Wright - The Palm Of Your Hand
(Played from a test pressing if memory serves)
Jack Montgomery - Don’t Turn Your Back On Me - Barracuda
Sonny Turner - Doesn’t It Ring A Bell
(Alternate take of the platters release)
The Trends - Thanks For A Little Loving - ABC
(Oldie by this time)
Major 4 - This Little Girl Of Mine - Venture
(Montclairs)
Carltons - I’m A Man - Argo
(Melvin Davis - Lonely Man)
The Whispers - Flying High - Soul Clock
Ronnie Dyson - Lady In Red - Columbia
Band Track - Airplane Song (Unissued)
Jimmy Ruffin - Don’t Feel Sorry For Me - Miracle
(Played off an acetate)
Utopias - Girls Are Against Me - LaSalle
Larry Wright - Sweet Sweet Kisses - A-Go-Go Prophets - My Kind Of Girl -
Honey & Bees - Dynamite Exploded - Arctic
(Alternate take)
Stanley Mitchell - Get It Baby -
(Oldie but Popcorn’s test press)
Tony Hestor - I’ll Be Your Champion (Unissued)
Bunny Sigler - For Crying Out Loud - Decca (ex Guy cover up)
Johnny McKinney - If You Leave Me - Clock