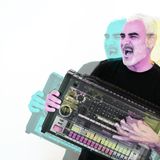 César de Melero is one of the pillars of House Music in Spain for its own right and one of the promoters and pioneers of this sound in this country.
Was one of creators of "Balearic Beats" Ibiza´s particular sound during the 80´s. The "White Island" boosted him to an international recognition.

In 1994 César de Melero created along with three partners in Paris the label PRO-ZAK TRAX, one of the most recognized of the "French Touch".

Aleem, Seven Dub, Kojak, Grant Phabao or Dod are some of the most outstanding artists of this label, supported by international Djs such as Fat Boy Slim, Dj Sneak or Armand Van Helden among others.