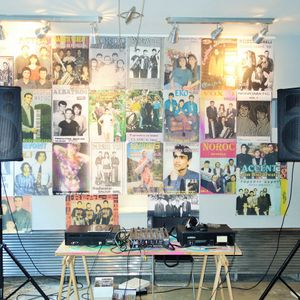 PARADAIZ Tape Mașina starts with the interest for an unexplored cultural area
within the social context of the 90s Romanian transition. Having roots in the
sub-cultural phenomena of the 80s - operating at an illicit level, outside the
landscape produced and controlled by the official culture - the party and
proto-manele music was broadcast through a bootleg system: recorded ad hoc,
during the events that these bands performed at - the important names of the
incipient period are Azur, Odeon, Miracol C or Generic, in terms of the
minimalistic synth party music, or Dan Armeanca, on the proto-manele side, in a
"upgraded" lăutari tradition - on magnetic tape and then copied on audio
cassettes and tape recorders, distributed through an underground system.
Accessible at the level of language, speaking directly about the immediate
reality, in response to the narrative stylizations of "popular mu...

See the full description and more info on http://cashmereradio.com