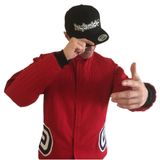 An extraordinary figure in the second generation of Techno producers to emerge from the electronic music explosion of the late 1980s and early 1990s, Cari Lekebusch has sustained over thirty years in music through an unwavering commitment and an unquenchable desire to constantly move things forward. Credited as being the figurehead of the globally influential Swedish Techno scene that subsequently spawned internationally recognized names such as Adam Beyer, Alexi Delano, Joel Mull and Jesper Dahlback, Lekebusch's standing as a studio innovator and production authority is well documented. He has borne many pseudonyms over the course of his illustrious career including; Fred (Missile Records), Mr Barth (Svek, Plumphouse), Braincell (Harthouse) and his electro moniker Mystic Letter K, to name a few. He has experimented with sounds across a range from Techno to Electro ... more at carilekebusch.com