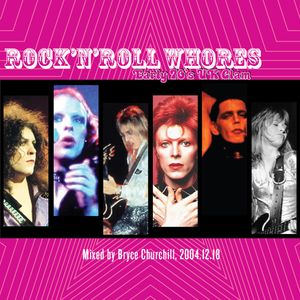 On July 6th, 1972, David Bowie appeared on the Top of the Pops in the UK. Looking into the television camera, dressed as an androgynous space alien he referred to as Ziggy Stardust, Bowie sang "Starman" to the citizens of Earth... and rock 'n' roll has never been the same. For a brief period of a few years, the glam craze swept Britain. Rebellious teens replaced their jeans and plaid shirts with bold makeup, glitter, and metallic stretch pants. But more importantly, an alternative to the working class culture appeared which gave the kids the keys to becoming a rock 'n' roll god themselves. New artists appeared, early pioneers like Marc Bolan skyrocketed, and the genre of glam was born... What would you do for Rock 'n' Roll?

Brilliant. I'm on the hunt for ideas for a 70's school reunion in November. Thanks for sharing.