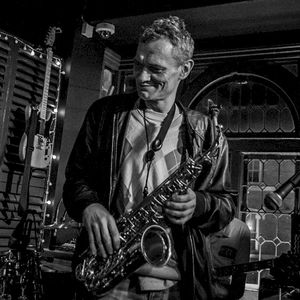 This show was 93rd in the global jazz chart.

A documentary presented and produced by Robin Valk, featuring legendary Birmingham Jazz saxophonist Chris Bowden. A 25 year story of highs and lows, charting Chris's blazing early success, bursting onto the UK national Jazz scene in the 90s, then his involvement with Acid Jazz, and eventually a slow recovery from addiction. Now fully healthy, he has just completed his third solo album.

The centrepiece of this programme is an hour-long Birmingham Jazz concert, captured at the CBSO centre by Neil Hillman. This recording lay unheard for a decade; its existence only emerged during a chat between Robin and Neil.

Chris talks at length about his career, and how he pulled himself back from the brink, with more than a little help from Birmingham friends and family, who rallied round to prod, push and shove him on to the right path. Some of the principals feature in the programme. This is a terrific story, with breathtaking music, some of which is heard for the very first time.

Support Brum Radio by subscribing directly to this channel and get access to exclusive rewards.