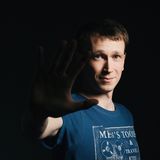 Never miss another
show from BluEye

BluEye - Trance Is The Air 270
by BluEye

BluEye was born in 1987 and currently lives in Ostrava, Czech Republic. He started with music production in 2002. Early in 2011 released first 4 tracks. Since then there has to his credit several, including several remixes. Its production focuses mainly on Uplifting Trance.

In 2013, his greatest achievement was winning the remix competition for the legendary Binary Finary. This remix was released on their label Future Focus.

In the same year he started playing as a DJ

Almost a year he had show "Trance Vibrations" on Ostrava's dance radio Helax. From october 2013 you could hear him every last Saturday of the month on the radio Zlatka in his part of the radio show called Energeťák.

At this time fully engaged his own show "Trance Is The Air," which is broadcast every Wednesday at 19:00 CET on the French internet radio Puls'Radio - Trance Channel. Sometimes mixing for radio show Language Of Trance.