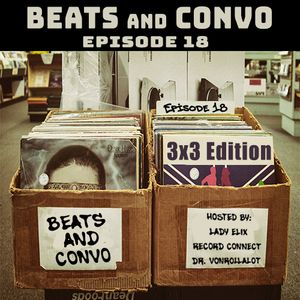 BEATS AND CONVO Episode 18: – 3 FOR 3 Editionby BEATS and CONVO

The sun is up, so the latest episode where the crew goes into effect with another 3 songs one album set. Reconnect Connect drops a needle on Pharoahe Monch’s latest project called ‘A Magnificent Day for an Exorcism’ where he teams up with Jack White, Daru Jones, and guitarist Marcus Machado to form the band Th1rt3en. Dr. von Rollalot drops a tribute to Eddie Palmieri ‘Mambo Con Conga Is Mozambique’ album, and Lady Elix celebrates the 20th anniversary of Res ‘How I Do’ featuring a special song sample treat.

More from BEATS and CONVO