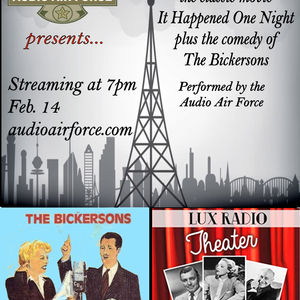 Annual Valentine's Day Special by Audio Air Force. Recreation of "The Bickerson's" from network radio script of the 1940s, and the radio version of the classic movie "It Happened One Night" originally released as a movie in 1934, but re-released in 1939, with this radio program to promote it. We are using the original network radio script.
The Bickerson's originally starred Don Ameche and Frances Langford. "It Happened One Night" originally starred Clark Gable and Claudette Colbert