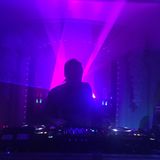 Born and raised in France, Audiolux got into electronic music in 1993, when he settled in the Netherlands. The european Clubbing scene was just bearing, and he leveraged from the strong creative influence that was led by major DJ’s such as Michel de Hey, Miss Monica, Stacey Pullen, CJ Bolland, Armand van Helden, Per, Masters at work, Basement Jax, Felix da Housecat, who were ruling the Dutch scene at that time.
Then he went back to France at the very end of the nineties, when the local electronic scene was in complete mutation, due to the explosion of styles and movements, (Free parties, Free Festivals, Spiral tribes kicked out from UK).

Vinyl addicted, his vision of DJing is based on technique, precision and coherence, after 25 years of clubbing and digging weapons, he defines himself as an humble story teller who just loves making people dance.