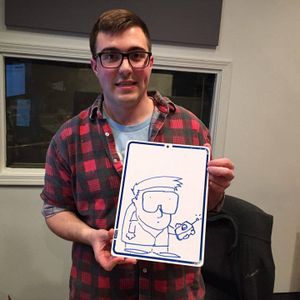 Everybody in studio is feeling like they might not be who they say they are. Kara and Jon were off on adventures of their own this week so Woody enlisted the help of Braden Stewart as guest engineer and Malcolm Whitfield kept everyone on track in the green room. Comedian and cohost of the longest running comedy mic in Rochester, RJ Purpura stops in for the big interview. Braden Stewart brings in a piece of investigative journalism he produced while working undercover in the Pacific Northwest! Musical guests Eric Witkowski and Tim Elswick of Collapsible Animal play two songs live! Also we squeeze in a discussion about human impersonation and hair care with Rob Ferries, Malcolm, Braden, and RJ. Check out all the other great WAYO programming at wayofm.org