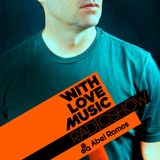 Never miss another
show from Abel Ramos (With Love Music)

When a house music legend like Roger Sanchez names his Breakthrough DJ/Producer of 2009, it’s time to sit up and take notice - meet Abel Ramos. 2010 has been a year loaded with work for Abel Ramos. Following his intense workload as remixer, valuable time was set a side in the study to concentrate on his own production’s. This material has started to be released on his With Love Music, imprint in collaboration with Spinnin' Records. Some of the highlights this year have been his productions for Toolroom, King Street Sound, Juicy Music and Nervous, as remixer and also releasing original material. Not forgetting his Dj performances around the globe appearances at festivals and clubs such as Rock In Madrid, Global Gathering Poland, Amnesia Ibiza, Stereo Montreal, Queen Paris, Space Miami, Roxy Prague or Discotheque Moscow, to name a few. In addition to realizing his first tour in Brazil with 10 performances at some of the best clubs in the country.