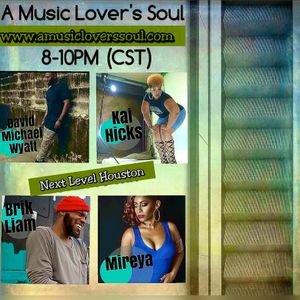 Kai Hicks is a native Houstonian, and one of the pioneers in Houston starting the underground live music movement. This sultry sanger has worked with Regina Belle, Ledisi, Chante Moore, Jennifer Lopez, Letoya Luckett, and Beyoncé…just to name a few. Singer/songwriter, Mireya, has a voice molded in the church and influenced by jazz, R&B and pop. After starting a family Mireya is currently setting the music scene on fire with her live shows. She has a new LP coming in January 2018. David Michael Wyatt is a singer from Texarkana ,TX that has showcased his gift on season six of BET's Sunday Best and trained at Berkley College of Music and has shared the stage with Legendary Stevie Wonder, Kirk Franklin, Kelly Price, Dave Hollister, Eric Roberson, Lalah Hathaway, Erica Campbell, Vanessa Bell Armstrong, and Yolanda Adams! He has even sung for then President-Elect Barack Obama. He blesses St. John’s Downtown Church in Houston with his talented gifts weekly! www.amusicloverssoul.com

More from A Music Lovers Soul with Terea