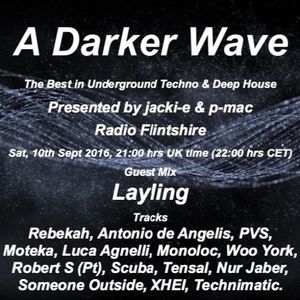 A Darker Wave, the best in underground techno and deep house, presented by jacki-e & p-mac.

In the first hour of the show we feature the brand new EP Anxiety by Rebekah, tracks from Connections Vol 5, a new compilation EP from Children of Tomorrow Records to be released on 26th Sept, plus tracks from Scuba, Woo York, Luca Agnelli, Nur Jaber, Tensal, Robert S (PT) and lots more. We also play some drum and bass from Technimatic.

The guest mix in the second hour is from Layling, an 18 yr old DJ from south-east England. We don't know a great deal about him. He is not on Facebook or Twitter and there's nothing on his Soundcloud page. But he has sent us a marvellous set of dark, hypnotic techno.

If you like the tracks we play, please support the artists by buying their music.

Produced for radio by Sergio Erridge.

More from A Darker Wave