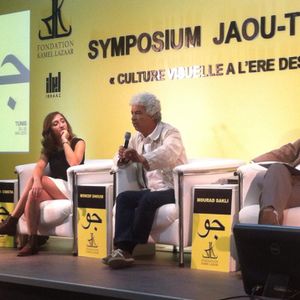 At JAOU Tunis symposium on Visual Culture in an Age of Global Conflict. The symposium was at the Bardo Museum, Tunisia as it had been last year, despite attacks on tourists this March by militants.

We speak to Moncef Dhouib, a veteran actor, screenwriter, producer and puppeteer is a pioneer in the Tunisian performing arts. Dhouib describes his project CinéVog, a local theatre complex model for theatres which he wants to spread across the Maghreb to bring the performing arts back to the people.

Also young Tunisian dancer and choreographer - once a successful footballer- Wael Maghni describes how he reconciled his 'controversial' dance career with his belief in Islam and the current state of employment opportunities for dancers and choreographers in Tunisia today. Maghni was on the roundtable 'Maghreb Condition Report I: The Choreographed Body in Tunisian Culture'.

Interviews are in French.