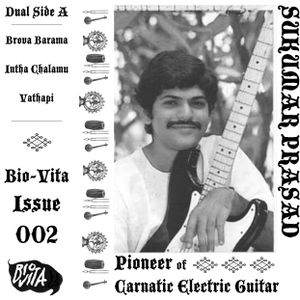 Sukumar Prasad was originally trained as a mridangam artist, but began to adapt Carnatic compositions to electric guitar in the late 1970s. He saw virtually no support from the Indian classical community at the time, who deemed it unacceptable to render classical music on this instrument. This was before the time of U. Srinivas, and no precedent existed for incorporating electric instruments into Carnatic music.

He was honored by the Madras Music Academy for his efforts in 1981 and conducted two tours in his time as an active musician, one in the USA in 1988, and one in Australia in 1989. His only release, a cassette issued in 1985, is long out of print.

Sukumar has disappeared from public performance, and is now rumored to be a member of a religious community and has no interest in releasing further recordings or performing in any serious capacity.

I dig it.Is this available for sale?

This is incredible. Where can I buy the cassette? Thanks!