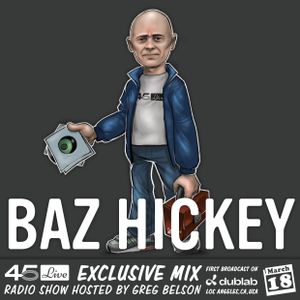 We're taking a trip to the Emerald Isle, to raid the crates of its favorite son of the 7" single;

The Irish Times label him as the '45 King' & Baz Hickey has earned the right to be described as such. Musically, he covers a lot of ground, always maintaining a hip hop sensibility when behind the decks. Having curated the Funk 45s night in Dublin's South William & later in the Sweeney Mongrel, his most recent all 45s night at The Bernard Shaw plays host to some of the scene's favourite spinners, including fellow 45live player, DJ Monk-One.

On the broadcasting side of the tracks, he has provided mixes for RTÉ (IRL), WFMU (USA) and 2SER (AUS)...now he's tearin' up the two's and one's across the globe, just for you!

Your host Greg Belson bookends the set as ever and this week....it's a dodge, dive, dip & duck into soul music touched by the funk....with a dose of jazz to the side.

Celebrating the 7" single like no other radio session across the globe.