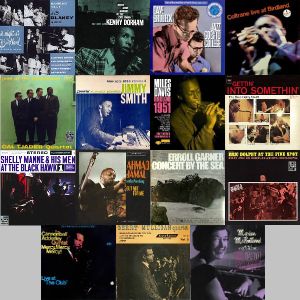 Greetings. So again, as detailed previously in our last show's description, it has continued to be a struggle to get out new classic jazz playlists recently. There are multiple shows that are planned including a variety of ancestor tributes of tall trees who have fallen in the last few years. It's just a matter of making the time to sit down and put everything together, for which we are striving.

This show celebrates our 3,000th follower. This time around a different approach to our coffeehouse jazz set was taken - each of the tracks in this show was recorded live in front of an audience. While the title of this show references the Birdland night club in NYC, not all of the performances are from this particular location (the title is a play on a 2001 movie title). These live performances are situated in venues such as night clubs, a college campus, recording studios, and historic theaters. Enjoy the show and thanks for following 30 Birds Jazz. Peace.

The Groove Point/ Halle Cat5y ago

I don't know how many times I've listen to Blakey at Birdland with Lou et al., but it still 'jazzes' me every time. Timeless...

Right on, DrJ. I concur.

Triple Hep and Blue5y ago