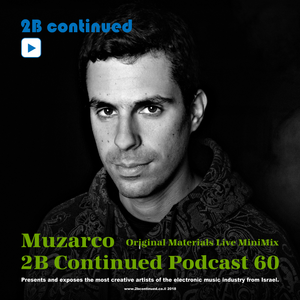 A Jerusalem native, muzarco started his musical journey releasing his seminal electronica EP in 1999 through the city's now-revered underground channels. In the following years he became an adept remixer and techno producer, as well as DJ. As a member of the Tel-Aviv based label Punch Music, muzarco's releases were played by DJs worldwide and he was asked to contribute his remix skills often.

Now residing in the city of Haifa, muzarco's musical path continues to evolve as he explores new grounds by taking his productions out of the studio as live performances.

"I'm very excited to finally record an all-original live set, twice as excited to expose unheard material that was kept in the dark for years and even more excited (if that's possible) to blend it all as one big remix.
Equipment used: A PC running Ableton live, Novation launchpad mini, Evolution uc-33 controller and Arturia keystep."

More from 2B Continued