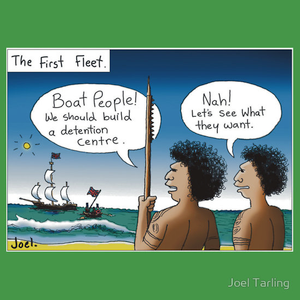 Today crowds wearing Australian flags were out marking "Australia Day" like good patriots. Meanwhile vitriol about "boat people" "invading" our shores continued - mostly from union jack waving boarder-control freaks. The irony seems lost on many of them, when a good number probably spring from the loins of the first "boat people" (i.e. colonising Brits from the 1700s). So, JTG 's "Aussie" music special mixed up a melting pot of locals, whether Indigenous Australians, or those originally hailing from Africa, Trinidad, Hungary, Mexico etc. Starting with a classic reminder call for an overdue treaty with the land's original dwellers, thru '70s funk/foxy hipster pop, to '80s electro, '90s bbq-beats & more recent dub, downbeat, fractured-soul & producers revisioning the past. The influence of Black music on much of it, is sobering. We lost some of today's show in transit, including a Melbourne Afro Orchestra & classic Deckchairs Overboard, but also the talk. So 100% music, "Aussie" music!